Policy Book The Voice of Agriculture in the Mountain State

These policies were adopted by the voting delegates of the member county Farm Bureaus at the 101st Annual Meeting of the West Virginia Farm Bureau, held at the Days Inn & Suites, Sutton, West Virginia, November 14, 2020.

THE DEVELOPMENT OF THE FARM BUREAU POLICY
West Virginia Farm Bureau is a voluntary, non-governmental organization, wholly controlled by its members. Financed by membership dues, it exists to provide a means by which farmers can work together toward the goals upon which they agree.

These policies represent West Virginia Farm Bureau’s public policy goals for 2021 and are deemed essential in attaining the long-term goal of better opportunities for farm families.

America’s unparalleled progress is based on freedom and dignity of the individual, sustained by basic moral and religious concepts.

Individual freedom and opportunity must not be sacrificed in a quest for guaranteed security.

We believe in government by legislative and constitutional law, impartially administered, without special privilege.

We believe in the representative form of government – in a republic – as provided in our Constitution; in limitations on government power; in maintenance of equal opportunity; in the right of each individual to freedom of worship and in freedom of speech, press and peaceful assembly.

Individuals have a moral responsibility to help preserve freedom for future generations by participating in public affairs and by helping to elect candidates who share their fundamental beliefs and principles.

People have the right and the responsibility to speak for themselves individually or through organizations of their choice without coercion or government intervention.

Property rights are among the human rights essential to the preservation of individual freedom.

We believe in the right of every person to choose an occupation; to be rewarded according to his/her contribution to society; to save, invest or spend; and to convey his/her property to heirs.

Each person has the responsibility to meet financial obligations incurred.

We believe that legislation and regulations favorable to all sectors of agriculture should be aggressively developed in cooperation with allied groups possessing common goals.

We support the right of private organizations to require membership as a prerequisite for member services. 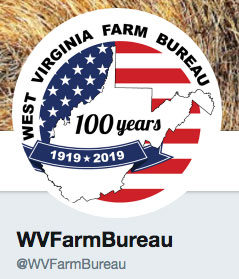 Got a Question? Email us at contactus@wvfarm.org or use our web form.

Stay Up to Date with the
West Virginia Farm Bureau.

You Don't Need to be a Member to Subscribe